Genetics in the palm of your hand: JI project deploys portable sequencing at the bedside 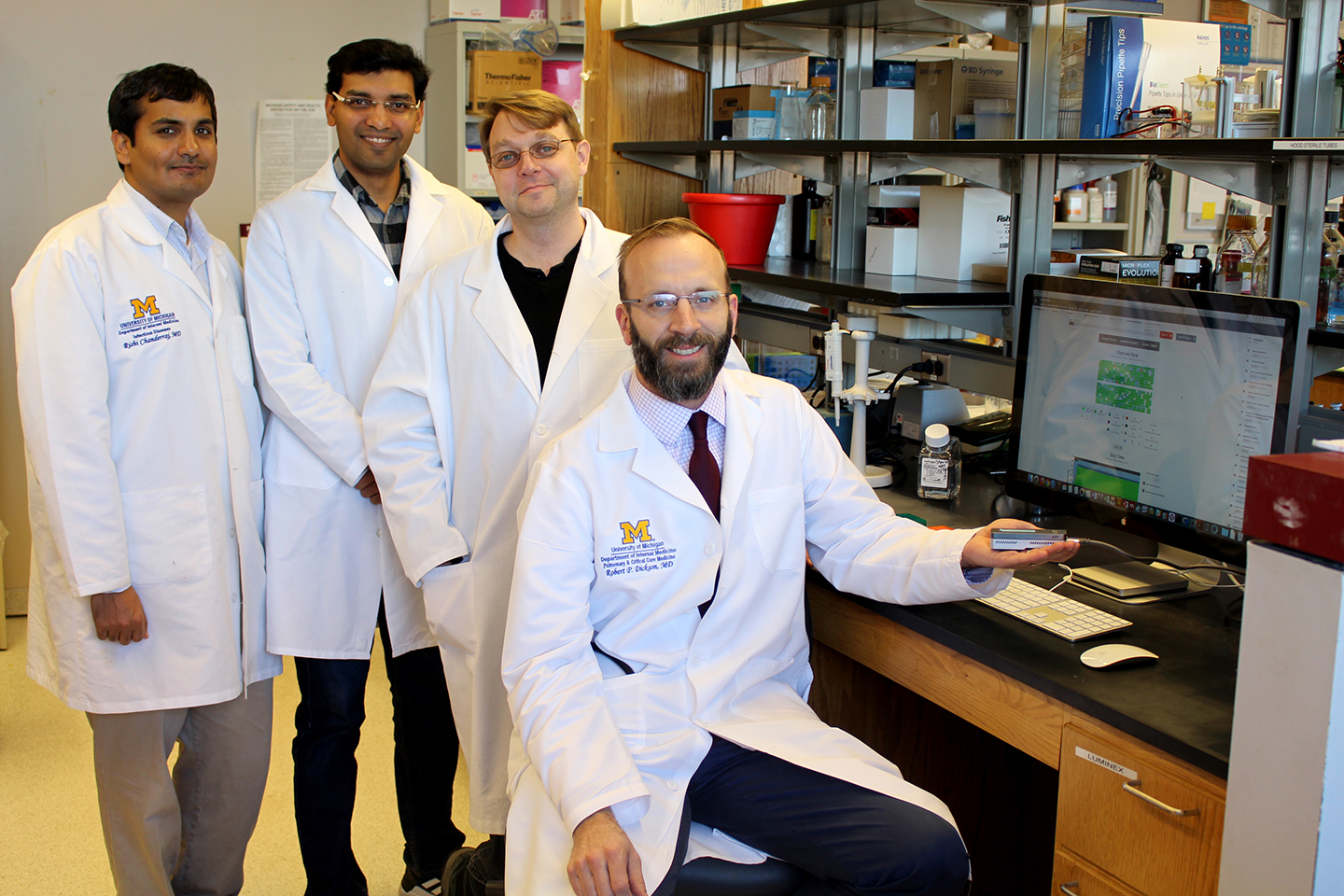 While advances in genetics have revolutionized things like cancer treatment, the impact has not been universal across all areas of medicine.

Tumors can be biopsied and sequenced to help determine their cause at the molecular level and perhaps point to a targeted treatment. At the same time, the principal science used to identify and treat many common illnesses has remained essentially unchanged for more than a century.

“When we suspect a patient has a bacterial infection, we take a culture, give it time and see what grows – Louis Pasteur would totally recognize what we’re doing,” said Assistant Professor of Internal Medicine Robert Dickson. “Sequencing technology has revolutionized the way we think of microbiology in the body, but it hasn’t reached the bedside when it comes to diagnosing infections.”

Dickson’s latest project, a Joint Institute collaboration with Peking University Third Hospital Chief of Respiratory Medicine Ning Shen, aims to change that. They plan to use new portable DNA sequencers to diagnose ventilator-associated pneumonia (VAP) in critical care patients – faster and more accurately than traditional culture tests are able to do. If successful, it could mean shorter detection times for VAP and also a reduced reliance on the kind of broad-spectrum antibiotics that contribute to drug-resistant bacteria.

A major concern in every critical care unit, VAP occurs in between 10 and 40 percent of patients who remain on mechanical ventilation longer than two days, with individual risk increasing with each day a patient remains on the ventilator. It is a significant contributor to the cost of care as it extends hospital stays and makes sick patients sicker.

VAP is also difficult to diagnose at the bedside. Clinical signs – fever, rapid heart rate, and other inflammatory responses – are common in the very-ill patients typically on ventilation and may not be specific to VAP. A primary method of diagnosis is to sample the patients’ lung using bacterial culture, a process that typically takes between 24 and 72 hours. Dickson believes they can reduce that time drastically through real-time sequencing using a new palm-sized nanopore sequencer, the MinION, that is powered by USB and ports into a laptop or desktop computer. Developed in the UK, the $1,000 devices are about two thirds the size of a chalkboard eraser and have been field-tested around the world, including by Dickson’s lab in Ann Arbor, which has already used it to identify pathogens in the lungs of patients with pneumonia.

Their prior studies took about nine hours from specimen collection to completed analysis. Through process improvements (Dickson’s lab is working on efficiently isolating DNA and analyzing sequencing data) the team believes they can cut that time in half moving forward.

“Our goal is to get the time from collection to identification down to about four hours or less,” Dickson said.

In their new study, one of ten new projects funded in 2018, Dickson and Shen plan to collect and sequence samples collected from the lungs of about 200 patients on ventilators across both sites. Results from the genetic sequence testing will be checked against culture tests from the same patients to compare speed and accuracy in order to inform protocols for the sequencing method. The sequencing approach holds potential not just to inform clinicians regarding which bacteria are present, but also how to treat them.

Because VAP can cause serious complications, physicians take few chances, often prescribing broad-spectrum antibiotics even for suspected cases rather than waiting a day or more for traditional lab results. But this better-safe-than-sorry approach contributes to the prevalence of so-called ‘superbugs’ that develop a natural resistance to antibiotics and other drugs.

“This is a particularly good project for international collaboration because it has such broad implications,” Dickson said. “Antimicrobial resistance is just as much a problem in Beijing as it is in Ann Arbor. For Michigan Medicine and our partners in China, this project is a real opportunity to tackle an important clinical concern with exciting new technologies.”